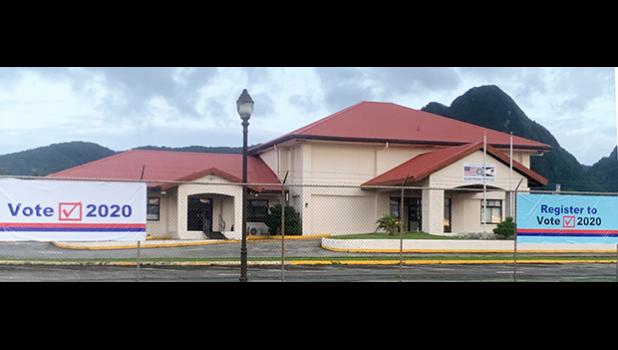 By
Fili Sagapolutele
fili@samoanews.com
Gov Lolo receives special award for voting in all local elections since 1977

Pago Pago, AMERICAN SAMOA — With the Nov. 3, 2020 general election just three months away, chief election officer Dr. Lealofi Uiagalelei on Monday issued a reminder of ongoing activities by the Election Office, and one of them is encouraging local qualified residents who have not registered to vote, to do so before the deadline.

According to Uiagalelei, voter registration is still ongoing at the Election Office in Tafuna from Monday to Friday between 8a.m and 4p.m. Registration ends at the close of business on Oct. 5th.  Documents needed to register to vote include: birth certificate, social security card and photo ID.

Three-days after registration closes, the Election Office will release the latest update of the voter registration roll to candidates seeking public office, according to election officials.

Absentee voters including local active voters stranded off island due to the COVID-19 pandemic are allowed to vote by absentee ballot and they can apply online by visiting the website www.aselectionoffice.gov.

As previously reported by Samoa News the chief election officer, through his authority vested under local law, is allowing local active voters stranded off island to apply and vote absentee. This will be canceled if borders are re-opened before the Nov. 3rd general election. Currently lights between Honolulu and Pago Pago are suspended through Aug. 31st.

For candidates wanting to run for Governor and Lt. Governor; Delegate to the US House and the local House of Representatives, deadline for filing nomination papers is 4:30pm on Sept. 1st.

And candidates who wish to run for public office but are stranded off-island can designate a committee person to pick up and process the nomination papers.

Uiagalelei also said that campaign fundraising activities and campaign waves as well as scheduling debates are not under the jurisdiction of the Election Office. He recommends for the public with questions to contact the appropriate officials of campaign committees for help on their concerns.

During the July 17th cabinet meeting, Uiagalelei was finally able to officially present to Gov. Lolo Matalasi Moliga a plaque honoring the governor’s civic duty of voting in all local elections since American Samoa first elected its own governor and lt. governor in 1997 up through the last election.

“Based on election records, the governor has not missed voting in any election,” said Uiagalelei, who read briefly the message on the plaque, which states in part that “we present this perfect vote award 1977 to 2020” to the governor “in recognition for your outstanding civic duty, compassion, extra ordinary public leadership in all these years to the people “ of American Samoa.

After being presented the special award, the governor said the importance of this issue to him is that people show their rightful duty to elect leaders by voting. He said that there are those who do not vote because they are unhappy with candidates running for office. He urged voters to exercise their rights to vote for leaders of the territory.

Lolo confirmed that that he has voted every time since the first time American Samoa elected its first governor, who was Uifa’atali Peter Coleman.

Uiagalelei had first mentioned the special award for the governor during a cabinet meeting two months ago, but said plaque had not arrived yet, due to issues with incoming flights.