Bluesky thanks American Samoa for 20 years of support 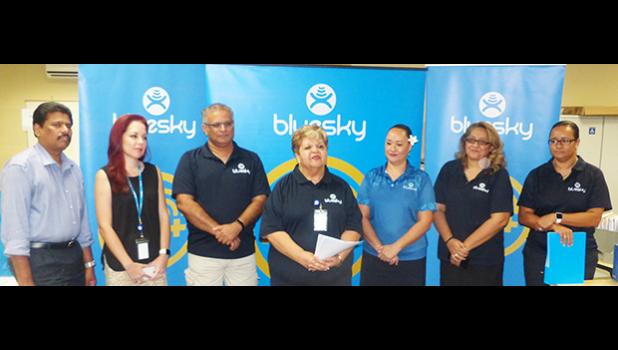 Pago Pago, AMERICAN SAMOA — This past Monday, at their headquarters in Nuuuli, Bluesky thanked American Samoa for two decades of support. The company opened its doors for business in 1999, offering premiere telecommunications services in and for the local community.

Over the years, Bluesky has contributed greatly to ASG revenues through corporate and wage taxes. Of the 100 staff members, 92% are local.

The company - under the motto: Always There - has invested more than $20 mullion into capital expenditure and continues to bring the latest innovation of mobile, broadband, WiFi, cable TV, and Cloud services to locals.

Through scholarships, on-the-job-training, internships, partnerships and sponsorships, Bluesky has contributed over $1 million to the community over the last 20 years.

In recognition of the community's support and loyalty of its customers, Bluesky officially announced yesterday its anniversary plans.

In alignment with its commitment to invest in youth empowerment and technological innovation, Bluesky is allocating $20,000 to support technology-based initiatives for all local high schools in both Tutuila and Manu'a, all of whom are invited to apply for funds for any technological project that utilizes technology to benefit its students.

Celebrations will conclude with the "Summer Bash Carnival" at the Su'igaula Ole Atuvasa Beach Park in Utulei on July 20th, culminating with a concert featuring Polynesian superstar George "Fiji" Veikoso and his entourage.

There will be lots of carnival games, food, bouncers, prizes and… for the first time ever in American Samoa: an inflatable Aqua Water Park on the beach.

Everyone is invited, everything is free!

"On behalf of the team at Bluesky, I would like to say 'Faafetai tele lava' to you our customers for your support and loyalty over the past 20 years. Without you, we would mot be able to continue our commitment to technological advancement, youth empowerment, partnerships, sponsorships, and major contributions to the American Samoa community," said Raj Deo, Bluesky Country Manager.