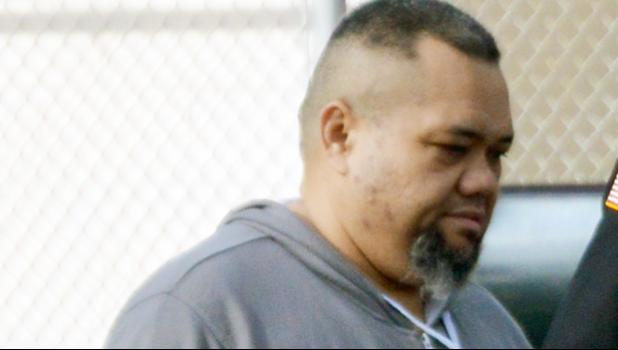 Pago Pago, AMERICAN SAMOA — Despite strong opposition from the government’s attorney, District Court Judge, Fiti Sunia has granted the defense motion to set a bail amount for former DPS police officer, Steven Tuatoo, who had been ordered by the court to be held in custody with no bail after his initial appearance last month.

Sunia set a cash bond in the amount of $100,000 for Tuato’o, subject to certain conditions he has to comply with if he is able to post his bond.

Tuatoo was ordered to surrender his travel documents to the government, and not having any direct or indirect contact with government’s witnesses including his co-defendants in this matter. He also cannot possess any illegal drugs or any dangerous weapons, nor can he leave or attempt to leave the territory while his matter is bending.

Tuatoo appeared in court last Friday for his preliminary examination (PX), which was set by the court after his initial appearance on Thursday, July 26, 2018. However, when his case was called, his attorney informed the court that Tuatoo wished to waive his right for a preliminary examination hearing, and have his case bound over to the High Court for further proceedings.

Before the court was informed about Tuatoo’s PX status, his attorney first argued a verbal motion asking the court to set a bail amount for his client. Anderson stated that after speaking with his client, it appears that Tuatoo is willing to cooperate with the government in the matter.

Anderson said that while the court has already established bail amounts for his client’s co-defendants, he’s asking the court to do the same thing for his client. He then made some points to support his motion.

“I spoke with my client regarding this matter and it appears to me that there was a misunderstanding between my client and the government when this case was first brought to light. However, if the court accepts our motion and establishes a bail for my client, I assure the court that my client will make all of his court appearances until this case is resolved,” Anderson told the court.

The prosecutor stated to the court that the defendant is facing serious charges including the unlawful possession of illegal drugs both marijuana, methamphetamine and also unlawful possession of a prohibited weapon, and fleeing from American Samoa with the understanding that there is a criminal case against him.

“This defendant is a flight risk. He’s a danger to the community in every way. According to the affidavit, he admitted to police that he’s a meth user, and for these reasons, the government feels that the defendant should remain in custody until this case is resolved,” Pengelly told the court.

Moreover, the government’s attorney also recapped to the court the status of the defendant’s case while he was in Washington State early this year, where he was arrested twice for domestic violence against his wife. As a result, he was extradited from Washington State (WA) to face his charges here in the territory.

Judge Sunia looked shocked after hearing Pengelly’s statement and then asked, “Was there an extradition warrant?”

Pengelly replied, “Yes your honor. I have the copy of the extradition warrant where the defendant was extradited from WA last month to answer charges against him.”

Again, Pengelly stated to the court that the defendant was arrested twice by WA police for domestic violent, in a case involving his wife, where he was charged and later convicted for assault.

Defense attorney Anderson wanted to add to the government’s statement.

He told the court that according to the information that was provided to him by his client, Tuatoo was sentenced to time served in Washington before he was extradited to the territory. Anderson told the court that despite what has being said by the government, he feels that his client is entitled to bail as the court set for other co-defendants in this same case.

After hearing a lot of information regarding this case from both attorneys, Fiti then granted the defense’s motion and established Tuatoo’s bail in the amount of $100,000, cash bond.

“There is one thing that I just want to make it clear, when the warrant was issued in this case, it was not served because the defendant had already left,” Sunia told Anderson and his client.

The charges stem from a police raid of Tuatoo’s home in Alofau in November of last year in which according to the government’s case, numerous pieces of contraband were found including substance testing positive for methamphetamine, marijuana and a 16 gauge shotgun.

The search was conducted on Nov. 9, 2017, and following the raid, Tuato’o was booked at the TCF until the next sitting of District Court, which was Nov. 13, due to the Veterans Day holiday.

Between Nov. 11 and 12, according to the government, corrections officers at the TCF improperly released the defendant from custody at the expiration of the 48-hour confinement.

Tuatoo then traveled to the mainland via Samoa but he got on the wrong side of the law there in a domestic violence case, and was charged.

He pled guilty to a misdemeanor charge of Domestic Violence Violation of a Court Order and was sentenced to time served.

Governor Lolo filed a request for extradition of Tuatoo and he was returned to the territory on July 24, 2018.