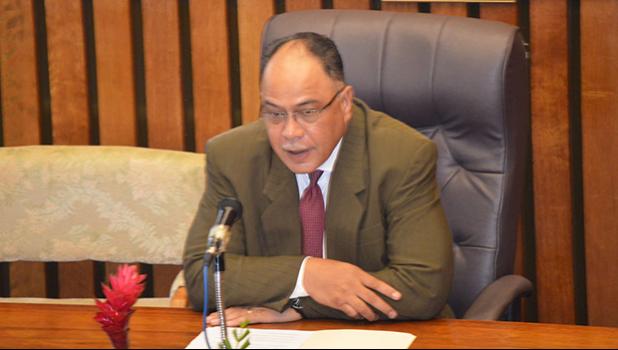 Court hears about Samoa’s alleged policy regarding overstayers being deported back
By
Ausage Fausia
ausage@samoanews.com

Pago Pago, AMERICAN SAMOA — “I don’t care what the Samoa Government says about their citizens being overstayers here in the territory. Just send them back to Samoa.”

These were the words of Associate Justice Fiti Sunia during the sentencing of a man from Samoa, convicted of assaulting a high school student by striking his head with a tree branch, resulting in the minor blacking out and requiring 12 staples to close the wound.

Teofilo Kuka pled guilty to second degree assault, a class D felony, punishable by  imprisonment of 5 years, a fine of $5,000 or both.

During sentencing 2 weeks ago, Kuka apologized and begged for a second chance to return home to care for his family, especially his parents. He also apologized to the victim’s family and asked for forgiveness. “I wasted many days of my life in prison… I’m truly remorseful and want to go home so I can find a job and do something with my life,” Kuka told the court.

Despite Kuka’s illegal immigration status, attorneys from both sides requested probation, with the condition that he continue to remain in American Samoa.

Defense attorney Rob McNeill said his client was born in Samoa but raised in the territory. Kuka’s immigration status expired in 2016 and his sponsor currently resides off island.

An immigration officer called to the stand testified that Kuka was permitted to remain in American Samoa under the 2015 Amnesty Program — but in 2016, his immigration ID expired and was never renewed.

Furthermore, Immigration can’t renew Kuka’s status, or transfer his application under the new Amnesty Program initiated by the governor last month, because his sponsor lives off island.

Not satisfied with what he was hearing, Sunia continued Kuka’s sentencing, telling the prosecutor to bring in a senior Immigration officer or someone familiar with the Amnesty Program.

Last Thursday morning, the court heard from a senior immigration officer who testified that based on the information they had, not only did Kuka violate Immigration Laws, he also violated conditions of his stay in American Samoa. The witness said there is no option left, but to have Kuka depart the territory.

Prosecutor Laura Garvey then told the court that the Samoa Government (SG) has a new policy in place for their citizens who are overstayers and convicted of crimes in the territory.

According to Garvey, there is a list of things the SG needs American Samoa to fill out  before they consider allowing their citizens back into their county. Among them, is that American Samoa needs to provide a health clearance, court clearance, and determine whether the person being deported back has any ties in Samoa.

Garvey said she couldn’t remember, all she knows is that every time ASG tries to deport an overstayer back to Samoa, the Samoa Government rejects it. Sunia told her he doesn’t care what the SG says about its people who overstay.

“Just send them back home,” Sunia said. “And if they send their people back to us after we deport them , let them float between the two islands on a canoe. Don’t allow them back to our shores.”

Garvey informed the court that according to the information she received, the new policy from Samoa was signed by the Samoa Prime Minister.

Sunia did not mince words when he heard that. “The Prime Minister is not my boss. My boss is the people of American Samoa.”

Chief Associate Judge Mamea Sala Jr told the immigration officer that based on his testimony, it appears to the court that the problem with Kuka’s illegal immigration status falls on the Immigration Office, for not following up when his status was about to expire.