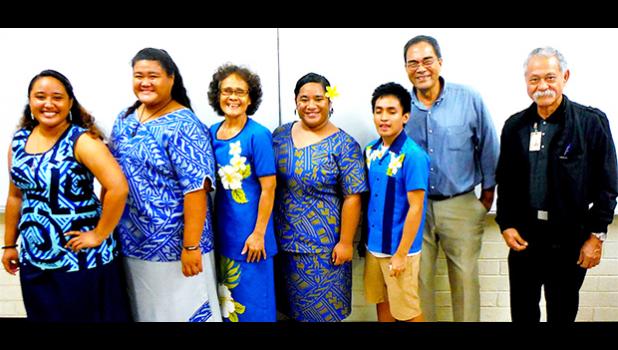 Apia, SAMOA — In late April, five students from the American Samoa Community College (ASCC) spent four days in the Independent State of Samoa, touring factories and other businesses to gain a firsthand perspective on the country’s economic climate.

The students made the trip as a project for the Business class International Marketing (MKT 212) which the Business Department has aligned with the standards for degrees in Marketing as set by the National Business Education Association (NBEA).

As with previous trips to Samoa by ASCC Business students, the MKT 212 students raised their own travel funds through campus bake sales and other activities beginning in January. While the International Marketing class has eight students enrolled, only five — Emilio Rojan Fernandez, Angelina Talamoni, Sifagaoali’i Mao, Marilyn Thompson and Vaipuna Tunoa, could take time off from their day-to-day responsibilities to make the trip. Business Department chairperson Dr. Faofua Fa’atoafe accompanied the students as their guide and chaperone.

For Emilio Rojan Fernandez, SamGo Chips proved the biggest eye-opener. “They actually produce their product using wheat-based noodles,” he said, “and it’s fascinating that a noodle can be turned into a chip.”

During a brief side-trip to Savai’i, the students visited the home-based business Swimming with the Turtles, where a family maintains a large pool of turtles in which visitors can swim if they wish.

Reflecting on the similarities and differences between the economy in Samoa and American Samoa, Fernandez expressed appreciation for the diversity he observed in the former.

“In American Samoa, we have only StarKist that supports our economy,” he said, “while they have a number of different factories. This also lessens their dependence on imported goods at least slightly. Compared to us, the wages in Samoa seemed extremely low — the lowest we heard of was $2.15 Tala per hour. Despite this, everyone we saw in the factories appeared to be enjoying their jobs. You could say American Samoa has a higher standard of living, but we’re dependent on the U.S., whereas Samoa is not dependent on anyone but themselves.”

Having organized previous student trips for the past several years, Dr. Faatoafe has become adept at finding comfortable accommodation, transportation and meals while staying within an allotted budget.

For all the students, traveling together for four days with a focused agenda was a first-time experience. “What stands out for me was the bond that we created,” said Fernandez. But most importantly, we learned a lot from this trip. It increased our knowledge on how to manage and operate a business.”

Upon their return to American Samoa, Dr. Faatoafe organized an informal social event for the parents of the students who had made the trip.

She gave an overview of their time in Samoa, along with their goals and accomplishments, and offered the students the opportunity to speak about their experiences. Finally, Dr. Faatoafe explained to the parents that whatever funds leftover from the trip had been divided equally, and she presented each of the parents with a share as a token of appreciation for their support.

For more information on the Business Program at ASCC, see the College’s catalog available online at www.amsamoa.edu.