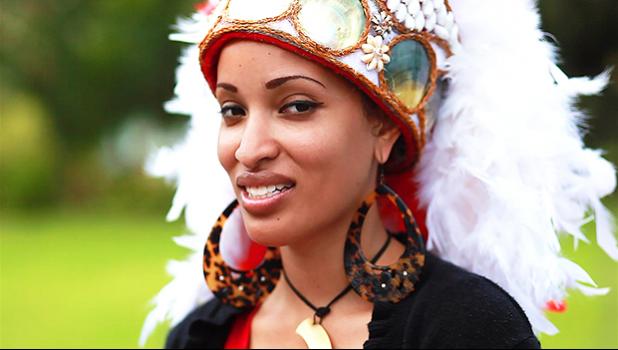 This week ArtPlace America is proud to announce that Queen Muhammad Ali has been chosen from nearly a thousand applications to receive funding through its 2017 National Creative Placemaking Fund.

ArtPlace received 987 applications in 2017, from which 70 finalists were selected and Queen Muhammad Ali is one of only 23 projects that will receive funding in communities of all sizes across 18 states and one US territory (American Samoa).

ArtPlace has a deep commitment to investing in rural America, with almost 52% of this year’s funded projects working in rural communities. Its National Creative Placemaking Fund is a highly competitive national program, which invests money in community development projects where artists, arts organizations, and arts and culture activity work to strengthen communities across 10 sectors of community planning and development.

Queen proposed “Manuia Samoa”, a solar-powered, social wellness hub designed by combining traditional Samoan interior design with contemporary tsunami-resistant architectural standards. Led by a partnership among architects, chiefs, nutritionists, pastors, and government officials, the 20,000-square-foot space will deploy art, health, and education programs that together will reduce the epidemics of diabetes and obesity.

“Declining health has become an epidemic on our Island with diabetes and obesity, our goal is to help reverse this epidemic by preserving, archiving, and documenting our traditional medicinal and healing arts” said Queen.

ArtPlace in a press release said Queen “will address the obesity and diabetes epidemic on the island with documentation, archiving and eLearning of Indigenous Samoan healing arts, natural herbal medicines, plant based nutrition, and by creating a social wellness hub in Faga’itua, AS that will serve as an artistic resource for a healthier community.”

Project duration is listed as two years, and that an amount of $500,000 is awarded.

“This year’s investments highlight critical dimensions of creative placemaking strategy that can provide great inspiration to communities across the country.” said F. Javier Torres, Director of National Grantmaking at ArtPlace. “We are deeply excited to announce these 23 new investments as our seventh cohort of funded projects through the National Creative Placemaking Fund.”

“Creative Placemaking seeks the full and robust integration of art and culture into the decisions that define the ebb and flow of community life. These projects embody what this looks like at its most effective,” said Rip Rapson, president and CEO of The Kresge Foundation and Chair of the ArtPlace President’s Council. “We were overwhelmed by the extraordinary commitment demonstrated in these projects - contributing to the growing understanding of creative placemaking efforts throughout the nation.”

Queen Muhammad Ali is a film director, multimedia activist, public speaker, and visual anthropologist. Before she became an artist full-time, Queen worked as an elementary grade teacher for a private school in Southern California. Her interest in education led her to delve more into arts and culture by utilizing them as tools for education and social change.

A founding member of the nationally distributed magazine, Nation19, Queen published the magazine to raise awareness on Hip Hop advocacy and historic inaccuracies affecting indigenous and black communities. Nation19 reaches millions of people worldwide on Facebook and Instagram daily. Queen’s name is not by accident. Her great grandfather is Paramount Chief Le’iato Tuli of American Samoa whose letters to President Kennedy are on display at the John F. Kennedy Presidential Library and Museum.

ArtPlace America is a ten-year collaboration among 16 partner foundations, along with 8 federal agencies and 6 financial institutions, that works to position arts and culture as a core sector of comprehensive community planning and development in order to help strengthen the social, physical, and economic fabric of communities.

ArtPlace focuses its work on creative placemaking, projects in which art plays an intentional and integrated role in place-based community planning and development. This brings artists, arts organizations, and artistic activity into the suite of placemaking strategies pioneered by Jane Jacobs and her colleagues, who believed that community development must be locally informed, human-centric, and holistic.