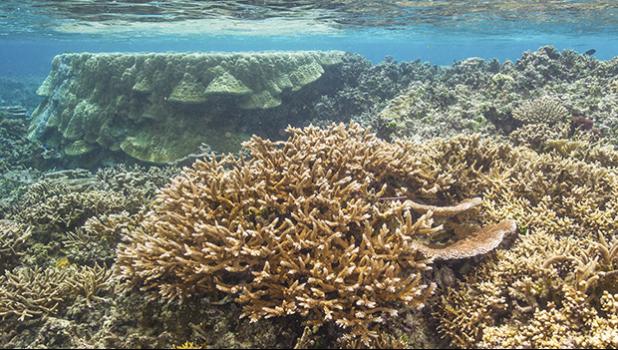 Pago Pago, AMERICAN SAMOA — American Samoa has been awarded funding for the study of coral reefs in the waters off Ofu and Olosega islands in Manu’a, says Marine and Wildlife director Va’amua Henry Sesepasara, at last week’s cabinet meeting, where he gave an update presentation following the 40th Meeting of the U.S. Coral Reef Task Force (USCRTF), held here two weeks ago.

“We had a lot of requests put into the [USCRTF] meeting...requests [for] protecting our coral reefs as well as try to find some funds to remove the two fishing boats on our reefs,” he said referring to the grounded vessels off Leone and Coconut Point in Nu’uuli.

While there was no immediate answer to requests for funds to remove the fishing vessels, Va’amua said, “They will review it, hopefully we can get some assistance from the federal government to remove those boats.”

He also said that American Samoa has submitted a proposal and received a grant award of $179,000 as announced at the meeting to do a study of the coral reefs at Ofu and Olosega.

He explained that there is problem there of algae that is growing over the coral. “So we were awarded $179,000 to do a study of how we can clean it out and why this happened,” he said.

At the final day of the meeting, University of Hawaii professor Dr. Charles Birkeland made a presentation on his study of coral, especially in American Samoa.

“The presentation was very interesting,” Va’amua told the cabinet meeting, adding that at the end of the presentation, the professor gifted to DMWR “a book of coral reef studies in American Samoa. And the studies started in 1902.”

“It’s very interesting resources that our department will use and the [US] task force appreciates that information so they can follow up these studies since 1902,” he said and thanked all ASG entities who were involved in coordinating the meeting, as well as the governor for his support.

He also said the more than 50 off island delegations, who attended the meeting, enjoyed themselves and it was a successful conference. He says the delegates raved about the Samoan food they tasted and were very happy to see that the Samoan culture remains strong and alive.