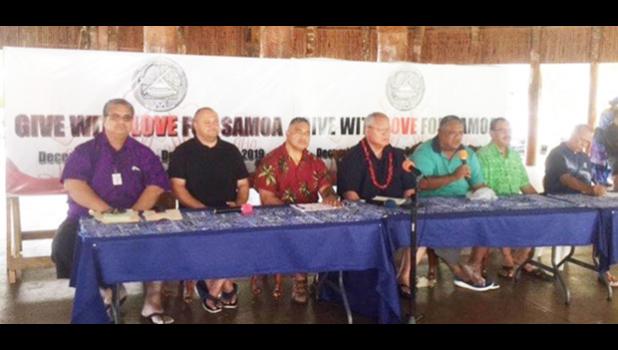 Pago Pago, AMERICAN SAMOA — With nine confirmed measles case in American Samoa, the Department of Health (DoH) have declared a measles “outbreak” in the territory, while all public schools will close starting Monday, Dec. 9th.

The announcement was made Friday afternoon during a live broadcast — on KVZK-TV and local radio stations — during the government-organized “Fesoasoani Alofa mo Samoa Fundraising” to help the Independent State with its deadly measles crisis.

During the broadcast, Health Department Epidemiologist Dr. Aifili John Tufa explained that samples were send to Hawaii for testing and results came back Thursday resulting in the emergency meeting to let the public know that “we are currently in the state of emergency” with a measles “outbreak”.

The test results show nine of the samples were positive and “five of them are travel associated — meaning these are individuals that most likely were exposed in their country of origin and then traveled to American Samoa and that’s when the symptoms arose and they were sick,” Dr. Aifili explained.

As to the other four samples testing positive, he said, “we’re suspecting that is local transmission — meaning that it’s most likely, that some of these travelers did transmit the measles virus to them, causing them to be sick.”

He also shared concerns faced by DOH saying that during “our investigations there are some among the population [who] were not born in American Samoa, [and] we do not have record of their MMR vaccination history.”

“And some of them, we have identified, were sick with the measles here, [then] they got better but did not present” themselves to the “hospital so that way we can track these numbers,” he explained further.

He said DoH is sure that the local cases “are not isolated events because the outbreak” in Samoa started in late October and “there is a possibility, that this has been going throughout in American Samoa and we’re finally finding out now.”

DoH’s Dr. Saipale Fuimaono reminded the public that the best protection against measles is to get vaccinated. For those planning trips to Samoa for the holiday or just to have fun, he recommends re-thinking such plans during this time when there is an outbreak in the two Samoas.

According to Dr. Fuimaono, the US Centers for Disease Control and Protection is sending Monday, Dec. 9th a vaccination shipment for American Samoa.

Responding to Samoa News inquiries, the Governor’s Office said Friday night that Gov. Lolo Matalasi Moliga made the call to declare the outbreak on Friday morning when actual local measles cases were revealed to him in a briefing.

The governor was also expected to issue an official executive order over the weekend.

With the outbreak declared, the government quickly moved to contain further spread of the measles by taking several actions especially in areas of large gatherings including schools.

Education Department deputy director, Philo Jennings — who was at the broadcast — announced that all public schools will be closed starting Monday, Dec. 9th until further notice. He also called on private schools to so the same in an effort to prevent further spread of the measles and also to protect students.

And starting Monday, a DoH medical team will be stationed at the DHSS’ offices for the American Samoa Nutrition Assistance Program (ASNAP), or Food stamp, and the Women Infant and Children (WIC) program.

Muavaefa’atasi said recipients of these programs coming in to pick up their benefits must provide a immunization record at the widow. He strongly recommends not to bring children to these offices.

Immunization records will also be required for individuals visiting these offices seeking assistant or information.

Another venue where there is large gathering of people is at bingo games and Police Commissioner Le’i Sonny Thompson called on churches and organizations overseeing these games to cancel them, during this time of the outbreak.

Samoa News understands that at least six different bingo games are usually held between Friday night and Saturday night. And they were all cancelled, according to information received by Samoa News.

Le’i also said all gatherings such as picnics at public parks, are banned at this time and he discourages large gathering of people for parties, including holiday parties.  He also discourages gatherings at night clubs. He said police will be out in full force 24/7 patrolling the community.

Speaking on behalf of the Secretary of Samoan Affairs, Manu’a District Governor, Laolagi called on village pulenu’u and village police to work together with DoH officials who are visiting villages.