The 4 TCF escapees allegedly “walked back through the main gate” 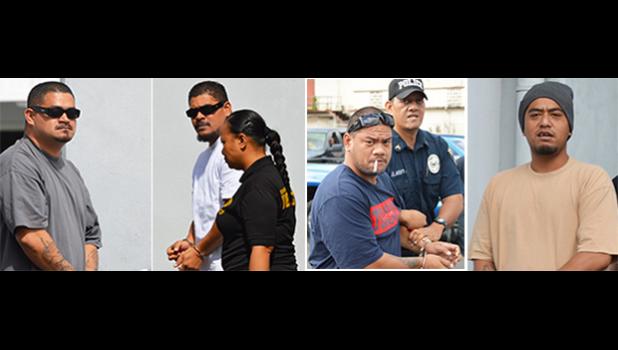 Pago Pago, AMERICAN SAMOA — The government’s case against four inmates at the Territorial Correctional Facility (TCF) accused of escaping from confinement last month has been bound over to High Court, — for arraignment this morning — after District Court Judge Elvis P. Patea found probable cause during a preliminary hearing (PX) this week.

Five inmates were initially charged of escape. However, the case against inmate Falaniko Fetoai was dismissed by Patea for insufficient evidence.

The four defendants are: Elliott Siaumau Jr and his brother, Thomas; Gabriel Tinae and Pati Lepou. Each man is charged with one count of escape from confinement, a class D felony, punishable by imprisonment of up to five years, a fine of up to $5,000 or both.

All five inmates appeared in court this past Monday for their PX where the government called one witness, Police Det. Toia Levao — the lead investigator.

According to Levao, he was called to investigate an alleged escape from TCF during the early morning hours of Oct. 19th. Levao said he interviewed several TCF officers who were on duty during the time of the alleged incident. According to one TCF officer, it was during head count that he realized that five inmates were missing from their cell. All five were housed in Bravo Unit in ‘cellblock #18’.

TCF officers canvassed the area looking for any possible avenues of escape utilized by the escapees and there was no sign near or around Bravo Unit except at the south end, where TCF officers observed a hole in the fence behind Bravo Unit — big enough for a person to go through. The matter was then reported to the TCF Watch Commander (WC).

Levao said he spoke to the WC who said she was informed by TCF officers who conducted the head count about the alleged escape, and she went back to Bravo Unit to re-confirm that cellblock #18 was empty.

The WC told Levao that as they arrived at Bravo Unit, she discovered that the chain securing the cell block didn’t belong to them [the prison], so she ordered two TCF officers to get a hammer and break the lock so they could go inside to see if the inmates were hiding.

As TCF officers conducted a search inside the TCF compound around 10:24p.m, they were shocked to see that four inmates entered the compound through the main gate. They were: the Siaumau brothers, Tinae, and Lepou.

Elliott Jr was the first to enter through the front gate and he headed straight to the main office. He was searched for contraband before he was taken back to his cellblock. Nothing was found on him.

A few minutes later, the other three inmates: Thomas, Lepou and Tinae entered the main gate and made their way to the main office. They too were searched for contraband and nothing was found on them.

“Where was inmate Falaniko at this time?” prosecutor Jason Mitchell asked. Levao said that as the TCF officers escorted the four inmates back to their cell, they saw Falaniko coming from a dark area inside the TCF compound.

“So, Falaniko was not inside the cell during head count but was seen walking from a dark area inside the TCF compound. Is that right,” Mitchell asked, and Levao said yes, adding that when he questioned Falaniko about his whereabouts, Falaniko verbally stated that he remained hidden because he was afraid that if he was found before the four escapees were located, the defendants might assume that he ratted them out.

Thomas, Tinae, and Lepou refused to make a statement to police.

In delivering his decision, Patea said the evidence the government presented to the court proves that the four inmates: the Siaumau brothers, Tinae, and Lepou allegedly left confinement, and were seen making their way back to the TCF compound through the main gate.

For inmate Falaniko, Patea said he doesn’t see any probable cause to bind his case over to High Court and the charges against