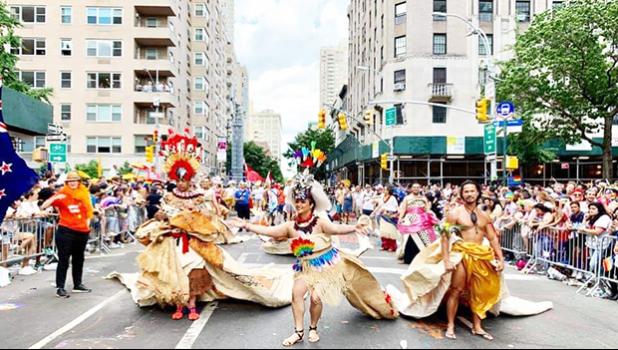 New York, NEW YORK — “We marched on 5th Ave in New York City, New York, as it was the WORLD STAGE in Celebration of WORLD PRIDE 2019. World Pride was not only to celebrate the diversity of pride, but also to commemorate the 50 years of the Stonewall riot,” said Princess Auva’a (pictured, center).

“The diversity of pride is for every man, woman, transgender person, non binary and binary, and free spirited humans. It is to honor and acknowledge that the paths we have chosen to lead our lives and to live authentically in our truths were not easy - whether they be personal struggles or as a community.

“We, the people of the Pacific (Tagata Pasefika), friends, family, allies, and members of UTOPIA from across God’s Earth traveled the distance to join UTOPIANYC and MARCH to represent us - the people of Polynesia at Large - at the WORLD PRIDE 2019.

“The World watched as we marched on in PRIDE as we presented the DIGNITY of the Polynesian culture and showcased our ‘Island Beauty’ with our traditional yet contemporary traditional attire.

“I stood in representation of ALL my Faafafine community from both Samoas and in honor of ALL my transgender military brothers and sisters in arms. I don’t know if I was worthy of the opportunity to do so, I do know I am humbled and honored that I was invited to do so. God bless this country. God BLESS my Tagata Pasefika, and GOD BLESS my people!”

United Territories of Pacific Islanders Alliance (UTOPIA) - Seattle, graced downtown Seattle, WA in celebration of the Seattle Pride March on June 30, 2019. UTOPIA- Seattle, the Grand Marshal for the parade, is under the direction of Taff Maene Johnson, a native of Nuuuli, American Samoa.

Pictured is the reigning Miss Utopia International, the beautiful Ara-Lei Mahealani Yandall of Leone and Ili’ili.