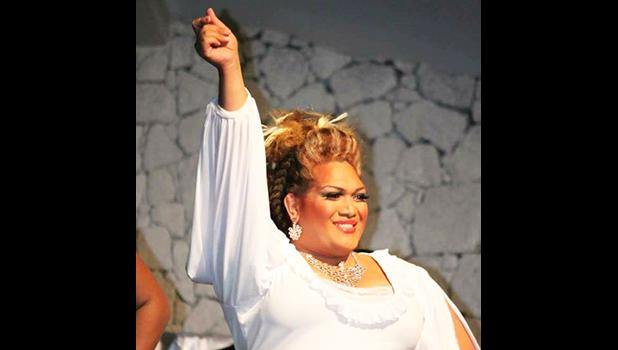 Pago Pago, AMERICAN SAMOA — This time next week, Sept. 13th, a schoolteacher from American Samoa will make history for being the first LGBT “emerging fashion designer” to showcase her creations at the world famous London Pacific Fashion Week (LPFW).

Berta Laumoli of Vailoatai departed the territory last night, enroute to London, to take part in an event that was established in October 2012 and originally founded as a fundraiser for British Armed Forces registered charity ‘Help for Heroes’, according to londonpacificfashionweek.com

Over the past 5 years, LPFW has continued as a regular fashion event in the United Kingdom, promoting established Pacific fashion designers.

Berta will be joined by other designers from across the Pacific, representing Tonga, Guam, New Zealand, Papua New Guinea, Hawaii and Fiji.

The creative mind behind ‘Fierce FashionByRL’, Berta has become the go-to person during special events that require an outfit that is both original, and unforgettable. She has designed various costumes for pageants - both here and off island.

Berta is a proud fa’afafine, a member of the Sosaiete O Faafafine I Amerika Samoa (SOFIAS), which is a group that embraces gender equality not only in the territory but also around the Pacific. Considered a transgender woman, Berta is an activist for LGBTQI.  She told LPFW, ‘‘I hope to invite people to see beyond the physical appearance, and to see how fa’afafine can be a positive change in the world through fashion and talent.’’

Berta is a schoolteacher at Pava’ia’i Elementary, where she is loved and adored by both her students and co-workers alike. According to her short bio on the LPFW website, “When it comes to their interests, talents, and abilities, her students motivate and inspire her to look beyond the four corners of the classroom, and create works that tell the story of who they are,”

Earlier this year, Berta flew to London to take part in the London Pacific Fashion Week — Teaser Show — on Feb. 25, 2019 where she showcased nearly a dozen of her creations.

“A champion of Pacific design, art, and culture, LPFW acts as a platform for designers living and working in the Pacific to engage with the fashion industry and represent them exclusively in the United Kingdom,” according to the LPFW website. “To do this, a select number of fashion designers from the Pacific travel to London every September for LPFW, which coincides with London Fashion Week, both to promote their brands and gain further experience in the global fashion world.”

While in London, the invited designers commit to a series of events, “allowing the breadth of their work to be showcased to a wide and diverse audience. Having witnessed the connection between fashion, culture, and the environment during her time in the fashion industry, founder of LPFW and former military service personnel, Fijian-born Ms Ana Lavekau has recently announced that LPFW's theme for the next three years will be 'Climate Change in the Pacific' [#ClimateChangeinthePacific].”