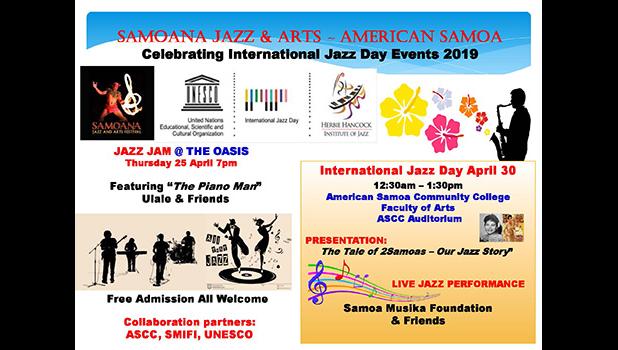 Pago Pago, AMERICAN SAMOA — Samoana Jazz & Arts Festival Director - 2Samoas, Peta Si’ulepa has been invited by the prestigious Herbie Hancock Institute of Jazz to participate in the 8th annual celebration of International Jazz Day (IJD) to be held at the end of the month in Melbourne, Australia.

“The invitation came as a complete surprise” Peta said. “I am deeply honored to receive this invitation to join four others from around the globe for this historic exchange. This is the perfect opportunity and platform to tell our Samoan Jazz story and in doing so promote our annual international Samoana Jazz & Arts Festival.”

“Each year since the establishment of the Samoana Jazz & Arts Festival in 2014 – we have celebrated International Jazz Day April 30 in both Samoa and American Samoa and highlighted our unique jazz story – A Tale of 2Samoas – our untold story of Jazz. This story is not well known by our people – but it’s essentially about the history of jazz as a contemporary music art form and its significance and influence in shaping Samoan contemporary music including our Samoan music history.  The Samoan Jazz story also embeds American Samoa’s pride of place as the Pacific’s birth-place of Jazz.

The story begins in Samoa where jazz bands first performed since the 1930’s. One of the first swing jazz bands, the South Seas Syncopators was headed by Moody Rivers who moved his family to Pago Pago, American Samoa after the United States became involved in WWII after the bombing of Pearl Harbour on 7 December 1941. Samoa was an isolated spot and was often by-passed by the USO shows.

Moody Rivers’ daughter the young 12 year old Mavis sang with the band (after school) entertaining the American Serviceman as they travelled around the various camps and on the warships anchored in the harbour — Mavis earned the name of “The Singing Mascot” as she and her father’s band became the prime source of entertainment on the Island, singing the popular songs of the day learned from the American records brought over by the troops, or from the Voice of America sheet music of the latest music.

She became so popular that for some evenings the soldiers and marines brought her to the central telephone station so her voice was heard over the camp intercom lines reserved for official conferences. This way her voice reached many more GI's and marines based in the outlying areas.

Mavis Rivers went on to make a successful career as an international jazz singer and recording artist in NZ and the United States with several “firsts” to her name – being the first Samoan to make records and becoming Samoa's and the Pacific's first Lady of Jazz and the first Pacific person to be nominated for a Grammy award in 1959 in the 'Best new artist' category.

Mavis was also the first woman to record on Frank Sinatra’s recording label “Capitol Records.” Frank Sinatra says of Mavis Rivers – as having “the purest jazz voice” he has ever heard.

Last year her memory was honored during the Samoana Jazz & Arts Festival in Apia and Pago Pago through a special Tribute to Mavis Rivers Concert led by her Grammy Award winning son, La’auli Matt Catingub – who brought the story of Jazz “to life” through sharing the life and music of his mother.

American Samoa kicks off this year’s International Jazz Day events on Thursday 25th April with a JAZZ JAM at the Oasis, Bowling Club 6pm with Jazz Fingers Ulale Pusi Ulale who will be joined by a great line-up of local and visiting favorite musicians.

International Jazz Day April 30 will be celebrated on this day by approximately 200 countries world-wide. The American Samoa Community College hosts this day with a Lunchtime date with Jazz – A Jazz presentation on The Take of 2Samoas – Our Samoan Jazz Story – followed by a Live Lunchtime Jazz performance with musicians of The Musika Foundation & Friends of Jazz. Both events are open to the public and free.