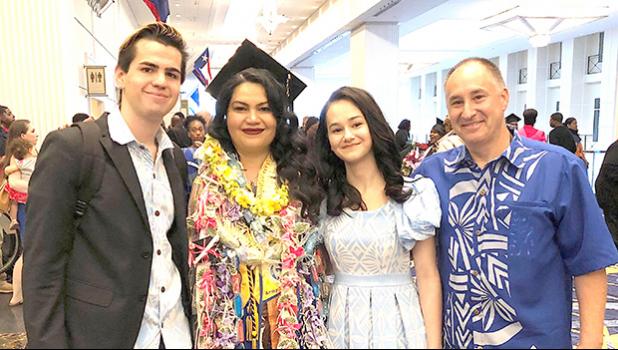 Christina was the valedictorian student speaker for the undergraduate Class of 2019.

Christina is an Army veteran who works at the US National Security agency. She is proud of her Samoan culture, actively promoting it in D.C., Maryland, Virginia, Hawai'i, and California.

Out of a family of eight siblings, “I am the first to receive a bachelor’s degree, and at the age of 43. Like many of you, I began with attempting to pursue a degree while deployed, then continuing on as a single-parent,” Christina said in her speech, of which a copy was provided to Samoa News.

Christina also shared that she was born in American Samoa, “a little island that is a possession of the United States in the South Pacific.”

“This degree was not handed to me. I worked very hard for this. I know you feel the same. I say this only to dissuade you from allowing society, others, and yourself to create, arbitrary boundaries and devalue your worth. We are limitless,” she said.

Download attachment below to read Christina's speech and background.