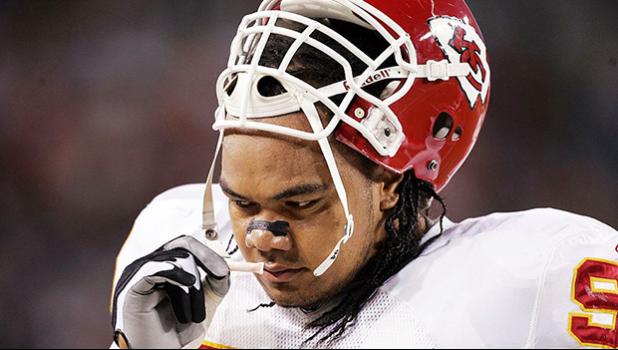 Federal prosecutors charged Saousoalii “Junior” Siavii, 40, of Independence with three counts of being an unlawful drug user in possession of firearms.

Siavii — a 2004 second-round draft pick by the Chiefs, widely regarded as one of the franchise's biggest busts — was arrested Saturday in Independence when a witness spotted a stolen vehicle with Siavii allegedly inside.

As police approached the vehicle, Siavii — a 6-foot-5, 330-pound native of American Samoa, who played in college at the University of Oregon — allegedly refused commands, prompting officers to use a Taser on him.

Court documents allege that, as Siavii attempted to get up, a Smith and Wesson 9mm pistol fell from his person and a fight ensued between Siavii and officers as they attempted to put the weapon out of his reach.

It wasn’t until another officer was able to put Siavii in a neck restraint, which caused Siavii to briefly lose consciousness, that officers were able to handcuff him.

In a search of Siavii’s backpack, officers located ammunition, 5.2 grams of methamphetamine, 12.2 grams of marijuana and drug paraphernalia.