Amata's Journal: A view from the motorcade 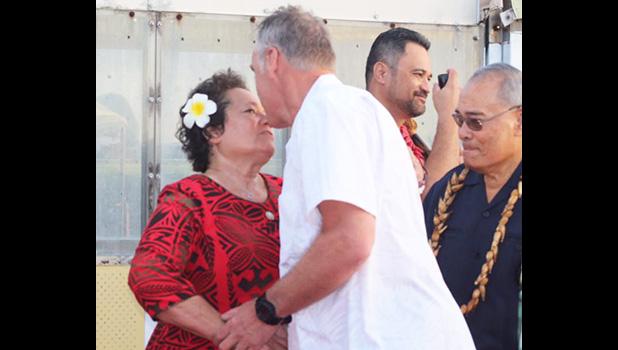 Washington, D.C. — First thing I noticed was how spry and rested the delegation seemed when they got off the plane in Pago. Immediately noticed that Secretary Zinke was wearing an ie faitaga which I attribute to gentle advice by our own Nikolao Pula.

Before I give you a view from the motorcade of Secretary Zinke's visit here Thursday, let me clear up a misconception I have seen from various reports and comments: this visit was NOT a refueling stop.

During the 114th Congress, Secretary Zinke was my congressional classmate and seat mate on the House Natural Resources Committee so we had an opportunity to develop a genuine friendship. When I attended his Senate confirmation hearing as secretary, he pledged to me to visit American Samoa as soon as possible.

Last week's visit was fulfillment of that pledge. American Samoa is actually out of the way from his previous stop, Guam, to Honolulu. It very much was his planned destination and was a very long trip. When the delegation arrived from Guam after that long overnight flight, they were ready to go and we were there to greet them.

After introductions in the airport VP lounge, we headed to the motorcade.

Because I have so much access and opportunity to discuss issues with the Secretary and talk to him at least once a week, I stayed in the background as much as possible so that the Governor and our other local leaders would have sufficient time and space to present their concerns to him.

Once we settled into the vehicles, off we went. The schedule called for no stops; however, when we reached LBJ Hospital, Secretary Zinke got out of his car and it was clear that he was moved by what he saw. He did say that he would deal with the hospital, a positive statement.

The motorcade then continued to StarKist, at which point the Secretary stopped, got out and plunged into the crowds. As a man who was raised in a little town in Montana, he felt at home right away  and was moved by the fish cleaners and cannery workers asking him to save their jobs. He talked about the importance of opening the national marine monument.

Upon our return from the cannery, our first full stop was Su'iga'ula Park for the ava ceremony, lunch and traditional entertainment.

The Ava Ceremony was even more special than usual because the Governor through the Secretary of Samoan Affairs, bestowed upon Secretary Zinke the chiefly title of Fofoga o Samoa (Voice of Samoa), a title previously held by the late U.S. Sen. Daniel K. Inouye, a champion for American Samoa.

Since the Secretary was not too steeped in our culture, Nikolao Pula served as his guide, and I'm sure he explained the ritual to the Secretary including the seating protocol and the significance of holding such a high chiefly title.

Lunch was absolutely delicious and the traditional entertainment superb.  People asked what the Secretary and I were discussing in this photo taken during the siva. He was telling me that the flight would be leaving on time and would I be ready to go. I replied, "Yes I went through this same drill when I rode back with Vice President Pence aboard Air Force Two.

Just last week our local volunteer firefighters returned from firefighting duties on DOI-controlled land in northern California and were present during the Secretary's arrival here. Zinke was so impressed he even posted a photo of our firefighters on his facebook page and tweeted a message about them as well.

All of this took place at Su'iga'ula Park, the perfect venue for the ava ceremony, lunch and traditional entertainment by our people. Secretary Zinke is a good sport and when it was time for the entertainment, he got up and did the siva with Miss South Pacific/ Miss American Samoa and the crowd loved it.

After lunch, it was almost noon and time to head out to the airport.

I was on the flight as it was important to get back to Washington since the House had come back into session two days before. More importantly, it was the opportunity to have five hours to go over our issues with American Samoa fresh in his mind, just as I did with Vice President Pence who came to American Samoa to dedicate the naming of the VA Clinic after the late Eni F. H. Faleomavaega right after my bill allowing it was signed into federal law by President Trump only weeks after his inauguration.

There is a local saying that when you visit us, you arrive as a stranger, but leave as family. I have no doubt that Secretary Zinke felt this way when he left the territory, thanks to the awesome hospitality and warmth of the Governor, Lt. Governor, President of the Senate, Speaker of the House, Secretary of Samoan Affairs, the cabinet, staff, administration and the workforce and all people of American Samoa.