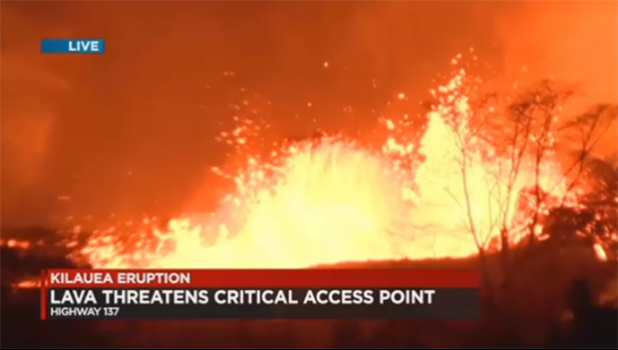 Civil Defense (CD) officials confirmed around 11 p.m. that lava from fissure 20 has reached the ocean. As the flow pours into the water and creates new land, officials warn of the threat for laze.

In addition, a critical access point to lower Puna communities was cut off when lava reached Highway 137 around 10:30 p.m.

The lava crossed the road just south of the 13-mile marker. The highway was shut down and roadblocks are in place.

Residents between Kamaili and Pohoiki were advised to decide if they wanted to voluntarily evacuate, although they were not in immediate danger.

The closure is in effect between Kamaili and Pohoiki Road. Kamaili Road remains closed due to a brush fire.

Highway 130 is currently only open to residents, and has already begun developing cracks. Metal plates have been installed, resulting in weight limits for motorists using that route.

The Highway closure is impacting thousands of residents trying to get in or out of the lava-affected areas.

Civil Defense officials also said the flow from fissure 20 split into two lobes, and lava was travelling in two parts as it headed towards MacKenzie State Recreation Area.

All day Saturday, powerful rivers of lava threatened homes and roads in the lower Puna area where volcanic activity is steadily increasing.

Officials went door-to-door to clear the area and they are asking everyone to stay away until further notice.

There are now three shelters open on the Big Island for those who do choose to evacuate along with at least 1,700 other residents in the lower Puna area.

USGS scientists also announced on Saturday that fissures are now merging and connecting to other lava flows in the area. Fissures 16 and 20 have merged together and are producing a very voluminous line of spatter and lava fountaining.