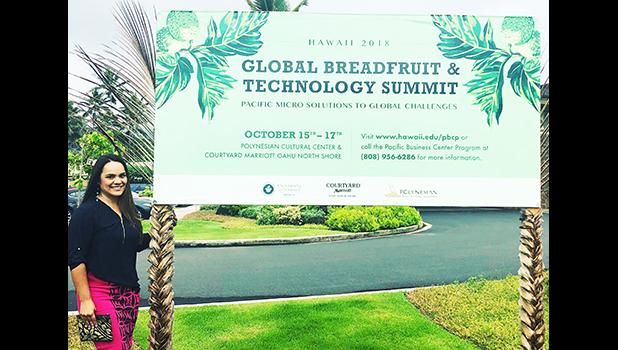 Laie, HAWAII — One of our very own, Tina Fonoimoana-Reid, owner of Cheat Day Bakery in Nuu’uli, American Samoa, was invited to participate in the third Global Breadfruit Summit hosted by the University of Hawaii Pacific Business Center Program (PBCP) and sponsored by the Polynesian Cultural Center (PCC) and the Courtyard Marriott North Shore in Laie, Hawaii.

According to PBCP, summit attendees were able to learn more about breadfruit products such as ice cream, pasta, vodka, cheesecake, pies, etc., along with breadfruit by-products including latex, pesticide, and a bio char more potent than the leading commercial fertilizer. Additionally, the significant health benefits of breadfruit, for example, in the fight against diabetes, obesity, and global hunger, were also discussed in depth.

Mrs. Reid represented American Samoa and presented at the 2018 Breadfruit, Technology, and Health Summit on Wednesday, October 17th as one of the breadfruit food-product culinary entrepreneurs. She shared the floor with other panelists from the Marshall Islands, the U.S. Virgin Islands, Hawai, London, Indonesia, and Lebanon.

About Tina Reid : Mrs. Reid was born in Hawaii, attended high school in Utah, and graduated from BYU where she met her husband, Mr. Adney Reid. Although she majored in Anthropology, her passion for culture and innovation led her to a culinary career. She started baking for her own children’s birthdays, but the feedback she received for her delectable creations convinced her to pursue the dream of opening her own bakery. As a result of this summit, her unique and delicious treats from Cheat Day Bakery in Nu’uuli are being enjoyed by people from around the world.

The Kuaea Group is a consulting agency located in American Samoa. The group has more than 20 years of professional experience in designing solutions with respect to the management and marketing of products. services, programs, and processes for corporate, government, and non-profit organizations.