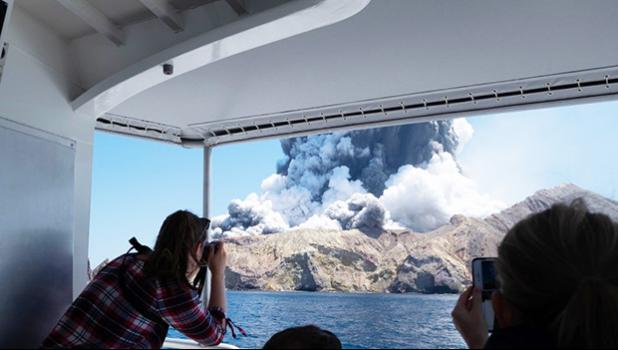 WELLINGTON, New Zealand (AP) — Officials say 47 people from New Zealand, United States, Australia, Germany, Britain, China and Malaysia were on a New Zealand volcanic island when it suddenly erupted. Of those, dozens were killed, injured or are missing.

Details are scarce because conditions on the island are too dangerous for officials to return and disaster victim identification experts have only begun their work. Some of the initial information about the dead, injured and missing:

Hayden Marshall-Inman’s brother wrote that the local tour guide had died “doing the one thing he loved.”

Mark Inman’s social media post was flooded with tributes, well-wishes and memories of Marshall-Inman, who has been celebrated as “a top man who left an impact on the world.”

Marshall-Inman was a guide for Whakatane-based White Island Tours and and was leading a tour group on a 7-hour day trip from a cruise ship to the volcano when it erupted.

“Whenever he came in and made a purchase, he always gave us (NZ) $5 to pay towards the next person’s groceries,” Julie Lockett said.

“He had the kindest heart, it was never about him; he definitely created a ripple effect of happiness to others,” she added.

Relatives have not given up hope for Tipene Maangi, another guide thought to be on the volcano when it erupted.

The 24-year-old’s partner, Kuini Morehu-Waenga, suffered through a sleepless night sick with worry and is now “absolutely devastated,” the Newshub website reported.

The pair were yet to start a family but have been “inseparable” since they met, it said.

The couple grew up together and were best friends for years before starting a relationship about three years ago.

Maangi began his job with White Island Tours in September and was really enjoying the position, his cousin, Anihera Paku, said.

Maangi’s grandmother, who did not want to be identified by name, was at Whakatāne Wharf early Tuesday waiting for news.

“We’re hoping he may have found a cave but knowing him, he would have been helping others before he thought about himself,” the grandmother told NZ Herald.

American newlyweds Lauren and Mathew Urey have been hospitalized with severe burns after surviving their honeymoon adventure.

The 32-year-old bride’s mother, Barbara Barham, who lives southeast of Richmond, Virginia, told The Washington Post that the couple “weren’t concerned that there was any chance of an eruption.”

Lauren Urey has undergone surgery for burns to her lower extremities covering at least 20% of her body and is recovering in an Auckland hospital. Mathew Urey, 36, had burns on 80% of his body and is being treated more than 1,000 kilometers (620 miles) away at a Christchurch burns unit.

Authorities have not released the nationalities of the five confirmed dead, eight assumed dead or the 31 hospitalized.

But Australia’s prime minister has said three Australians are suspected of being among the confirmed deaths, leaving Australian families frantic for news of who they might be.

Families have confirmed that Jason Griffiths, 33, of Coffs Harbor in New South Wales state, as well as Sydney couple Marion London, 56, and Nick London, 58, were in hospitals.

Frantic father Brian Dallow, of Adelaide, South Australia, said his lawyer son Gavin Dallow, 53, his partner Lisa Hosking, 48, and her daughter Zoe Hosking, 15, were among those whose fates were uncertain.

“They were in the island, that’s now been confirmed, but whether they got off or what happened we don’t know,” Dallow told Australian Broadcasting Corp.

“This is the worst. If we knew that something happened to them, it would better than this waiting, I can tell you at the moment. Because we just have to hold our horses and hope for the best,” he added.

The family later said Lisa Hosking had been found in a Hamilton hospital.

Former student Jesse Langford, his 17-year-old sister, Winona Langford, and their parents, Anthony and Kristine Langford, were among those visiting the island from the cruise ship.

“Please have the Langford family in your prayers,” principal Duncan Troy wrote in a statement.

A desperate Australian family was also seeking details about Julie Richards, 47, and her 20-year-old daughter, Jessica Richards, who were booked for a White Island excursion on Monday.

The mother’s sister, Barbara Whitehead, told the ABC that relatives were “overwhelmed” by a lack of information from authorities.

But there’s been no word about the two, despite other checks with New Zealand police, foreign affairs officials, and their cruise company.