Mormon leader: We didn’t leave Boy Scouts, they left us 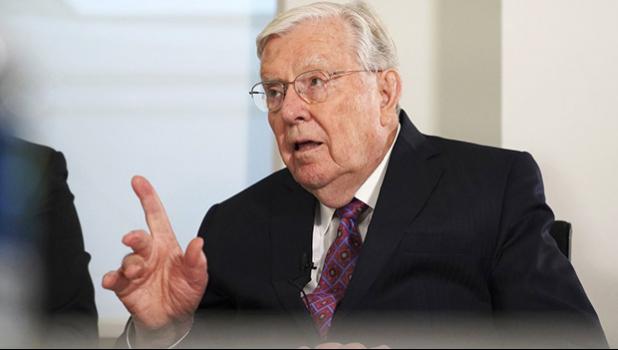 NEW YORK (AP) — A high-ranking leader with The Church of Jesus Christ of Latter-day Saints said Friday the church severed its century-long tie with the Boy Scouts of America because the organization made changes that pushed it away from the church.

“The reality there is we didn’t really leave them; they kind of left us,” said M. Russell Ballard, a member of a top governing panel of the church called the Quorum of the Twelve Apostles. “The direction they were going was not consistent to what we feel our youth need to have...to survive in the world that lies ahead for them.”

Ballard is in New York City to lead events with young adult church members and talk about preparations for the faith’s bicentennial next April.

During an interview, he talked about topics as diverse as the church’s support for medical marijuana, incivility in daily life and political discord.

At the time of the announcement, church leaders emphasized the desire to have a uniform scouting-like program it could use around the world and didn’t mention any philosophical differences.

The church, while moving to be more empathetic toward LGTBQ members, has maintained its stance that being in a homosexual relationship is a sin and its opposition to same sex-marriage. The church also has seen significant expansion in countries outside the U.S. where Boy Scouts wasn’t offered. More than half the church’s nearly 17 million members live outside the U.S. and Canada.

In another area, Ballard said the church supports medical marijuana but cautioned that its use be monitored. Medical marijuana became legal this year in the faith’s home state of Utah, where the faith has 2.1 million members. It’s also been legal for several years in Arizona, where 432,000 church members live.

“We think this ought to be managed under the medical profession and understand the real need and the real purpose for administering marijuana medically,” he said, “but recreational marijuana, we think has consequences because addiction, one way or another, starts very subtle sometimes.”

Ballard, 91, is the acting president of the Quorum of the Twelve Apostles, which is modeled after Jesus Christ’s apostles and serves under the church president and his two counselors to help set policy and manage church programs. Ballard is a Utah native who has been on the top governing panel for 34 years.

In response to a question on the church’s tenet on kindness, Ballard said the country’s behavior needs to improve.

“We ought to be nice to each other,” he said.

The people should pray that the leaders of this country feel the urgency and importance of turning in a divine direction, Ballard said.

“Surely if there was a time that we need it with all the things that are going on in the country and the world, wouldn’t it be nice if we asked heaven to help us a little bit?” he asked.