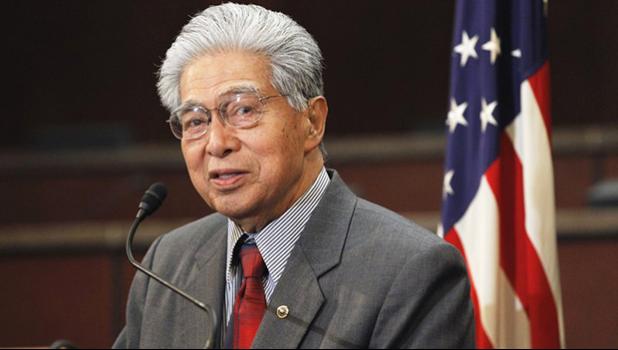 The Democrat served 14 years in the U.S. House before he was appointed to replace Sen. Spark Matsunaga, who died of cancer in spring 1990. Akaka won election that fall for the rest of Matsunaga’s term, and voters sent him back for consecutive terms until 2012, when he chose not to seek re-election.

His legislative style was described as low-key, a characterization he embraced.

“I have a Hawaiian style of dealing with my colleagues,” he said.

Akaka developed a reputation as a congenial legislator who made many friends while making few waves in pressing the interests of the 50th state.

“Senator Daniel Kahikina Akaka embodied the aloha spirit,” Sen. Mazie Hirono of Hawaii said in a statement. “He dedicated his life to serving the people of Hawaii as an educator, and in the U.S. Army, state government, the U.S. House, and the U.S. Senate. In Congress, Senator Akaka’s care, empathy, and collegiality served as an example for us all.”

In 1996, Akaka sponsored federal legislation that ultimately resulted in Medals of Honor — the Army’s highest honor for bravery — for 22 Asian-American soldiers who fought during World War II. Those soldiers included the late Sen. Daniel Inouye, who was severely wounded in Italy while serving with the famed Japanese-American 442nd Regimental Combat Team.

Akaka once said his main accomplishment in Congress was obtaining federal funds for Hawaii for education, energy and Native Hawaiian programs.

In the 2006 general election, the then-82-year-old senator stressed the value of his Senate seniority and his opposition to the war in Iraq. Akaka went on to become chairman of the Senate Veterans’ Affairs Committee.

He expanded his harsh criticism of the George W. Bush administration, getting involved in a number of issues with a more aggressive congressional staff. A World War II veteran, Akaka often stressed the hidden damage of war, including mental illness among veterans.

“As we work to meet the needs of all returning service members,” Akaka said, “we must pay close attention to the full range of war wounds, from eye trauma and damage to service members’ hearing, to (post-traumatic stress disorder) and depression, to burn injuries.”

He introduced several measures to improve services to veterans, help aging Filipino vets who fought for America in World War II and end contactor waste and fraud in Iraq.

But Akaka gained the most attention for his fight to pass legislation that carried his name.

The Hawaiian Recognition Bill, known widely as the Akaka Bill, was intended to give Native Hawaiians the same recognition as Native Americans and Alaska Natives.

Opponents called it unconstitutional favoritism toward one race even though it had broad bipartisan support in Hawaii, a state where no ethnic group makes up the majority of residents. Even some Native Hawaiians expressed doubts, arguing it would give the federal government too much immunity from their claims regarding land or other issues.

“Daniel Akaka was a clarion voice for the rights and needs of Native peoples, ensuring that our commitment to Tribal nations and Native Hawaiians was never forgotten,” Pelosi said in a statement.

Akaka’s first foray into elective politics was an unsuccessful primary race for lieutenant governor in 1974. He eventually became a special assistant to then-Gov. George Ariyoshi.

Born in 1924, Akaka grew up in a devoutly Christian home in Honolulu. He was the youngest of eight children of a Native Hawaiian mother and a Hawaiian-Chinese father.

After serving in the Army Corps of Engineers during World War II, Akaka earned his bachelor’s and master’s degrees in education at the University of Hawaii. He was a public school teacher, principal and program specialist for 18 years before becoming director of the Hawaii Office of Economic Opportunity in 1971.

Akaka is survived by his wife, Mary Mildred “Millie” Chong, four sons, a daughter and many grandchildren and great-grandchildren.